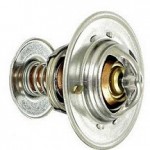 This week we're talking about low temperature thermostats, another item that nearly every tuning house sells and yet fail to really explain what they're for. A few months back, we talked about high pressure radiator caps and what advantage they offered, this time though we're looking at a part that is far more perplexing.

Here are a few descriptions from websites/manufacturers selling these, notice the trend of extremely vague language:

The SPOON Low Temp Thermostat S2000 Integra Civic will increase the vehicles cooling ability (false) by changing the operation temperature from 90C (stock)[194] to as low as 80C [176F]. This in turn will give your Honda a chance to be free of overheating (false). For best results, it is recommended that the Thermostat be used in conjunction with a low temperature Thermo Switch.

The SARD Low Temperature Thermostat - SST12 Mazda is a drop-in direct replacement for your OEM unit. The Sard unit will lower the temperature at which the cool water can mix with the warmer temperatures inside the engine (true). This will lead to a motor than can now run much more efficiently (false).

The FEEL'S Low Temperature Thermostat Civic FD2 will provide better, more reliable and faster cooling for your FD2 (false). By lowering the opening temperature to 68 degrees, and full open at 82 degrees there is a smooth transition in cooling (???), and you engine will be cooled optimally faster (?).

The MUGEN Low Temp Thermostat NSX S2000 will increase the vehicle cooling ability (still false) by allowing the circulation of the chilled water earlier than the OEM unit would allow it to (that part, true). Stock thermostats are intended for normal driving conditions and aren't made for those intending to give their car a work-out (false).

Reading these make you believe that a low temp thermostat are a good idea for those "pushing their car harder" and that they somehow improve cooling performance. There are other descriptions that also seem to indicate that they lower engine/intake temps to make more power. All rubbish.

The Function of the Thermostat & Cooling System Basics

The biggest misunderstanding about thermostats is that people believe they make the engine run cooler. They don't necessarily do that. The cooling system and load on the engine determines how hot the engine gets, the thermostat fully open will still be the mercy of the coolant system's ability to remove heat.

The thermostat can only determine when the cooling system is allowed to start cooling the engine. It sets a floor, not a ceiling on engine temperatures. The thermostat basically behaves like the hot and cold knobs in your shower, if the water is too hot, it turns the cold on a little more and if the water is to cold, it turns up the hot water.By regulating the flow through the cooling system it speeds up and slows down the flow of coolant into and out of the engine block.

In liquid cooling systems, the ability to cool is determined by a number of factors, but the basic keys are the surface area of the radiator (how big/how many small fins), the air flow through the radiator (fans on/off, speed of car), and how quickly or slowly the cooling fluid goes through the radiator. If the coolant spends a small amount of time in the radiator, it loses less heat. If it spends a lot of time there, it loses far more heat. Therefore you don't want the flow to be too high as the cooling system's ability to cool the engine will be reduced, not increased.

So if we don't run a thermostat at all, it takes a lot of constant load to get the engine properly warmed up and to keep it up to temperature on cold days. We also in some circumstances may experience overheating if flow through the system is too high as the coolant has to spend a certain amount of time in the radiator to actually cool down.

Some race teams do choose not to run a thermostat, but they are the minority. They usually run at least a restriction plate in place of the thermostat to slow down flow and allow some warm up to occur.  The reason that they may not run one at all is usually to remove a point of failure in endurance type races. In other words, if the thermostat fails and sticks closed, it could cause a pit stop or end the race. By removing it, they tolerate possible engine wear since they know they'll be at high loads throughout the race. Their cooling system is usually tuned to compensate for the lack of a thermostat as well.

What they're used for

So what then would a low temperature thermostat accomplish? Not much.

Around town and in the pits, you warm up faster than no thermostat at all, but you will take a while to warm up from 160 to 180 for example. You will get there however, especially on warm days, the only difference is you're trying to cool the car off as it's trying to warm up. As a mater of fact, if you sit there at idle, the temp will go up until the radiator fans kick on since radiators are poor cooling devices without air flow. In other words, sitting still, the thermostat opening temperature doesn't matter much at all.

Once you're moving, on the highway, with a 160 degree thermostat on a cooler day you could be cruising at 160-180 degrees (opening temp->designed operating temp). This is possible because the load on the engine is low and the outside temps are low. Therefore, the thermostat opening temp maters somewhat here. If you're coasting down a mountain, it will be a certainty that your coolant will reach the thermostat minimum if you coast long enough.

The problem with a low temp thermostat then for regular driving is that there are times when the car will be running at a temperature lower than it's design intended. The result is increased wear on the engine's internals. It's essentially the same as if you assembled the engine with clearances tighter than designed for because you didn't follow the directions or your tools were not calibrated properly.

Regardless, it would take literally a second or two before temps would be regulated by the cooling system, not the thermostat anyway since under load the engine is going to run well above the thermostat fully open mark anyway.

Remember that the thermostat is fully open pretty much any time the engine is under full load because the coolant temperatures spike pretty quickly.

In a race car, the floor (opening temp) of the thermostat is completely irrelevant unless you are running a very efficient and large radiator. Once you're out on the track for half a lap or so, your coolant temps are going to be in the 200 range anyway so the thermostat is fully open regardless.

You can use a low temp as a "band-aid" at the track sometimes. For example, if you know that your coolant temps are hitting the opening temp of your current thermostat at points the track and you're experiencing mild overheating, you might be able to patch this up by using a lower temp thermostat, especially if you're willing to run your radiator fans manually to help.

Why? Because during low load parts of the track you allow the coolant system to cool off more which means it will cope with higher load sections a bit better and may chase of mild overheating problems. This is acceptable on a race track as a temporary solution as wear is usually an acceptable compromise to get through the race. However, the right solution is to upgrade the radiator or check for possible malfunctioning sections of the cooling system. It is also more acceptable here because load is high during a race. On the street, even on hard drives, it's usually reasonably low.

So if you want to test this, the best thing to do is get an OBDII scanner and go out in an OBDII car and monitor the ECT sensor and watch how coolant temps regulate and spike as load changes.

The bottom line however is that in a street car, you're increasing wear and getting no benefit. In a race car, it's a band-aid but not one that you should plan to rely on.

If you're having overheating problems, check the cooling system thoroughly and if all is well, upgrade the radiator, fans or even the water pump -- not the thermostat. If your coolant gauge never goes above normal then your cooling system is adequate for your use of the car.

If you're chasing more power, this isn't a place to look. Any power gain would be circumstantial (ie, only under certain conditions), incredibly negligible, and at the risk of accelerated wear on your expensive engine internals (especially in street cars).