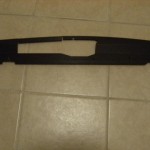 Anyhow, the vented radiator panel was not necessarily intended for this purpose but rather to help force that air into the intake snorkel found on the IS300 (and frankly on many other cars that pick up air over the radiator). The vent should actually be an area of very low pressure due to the engine sucking on it so in theory, this higher pressure air built up on the radiator front should be attracted to it like a magnet.

The panel I received had a strategically cut out section that sat directly in front of the intake duct so that the air would build up in front of the radiator (at higher speeds) and be forced up through the hole and supply the intake system with more high pressure air. Looks good so far.

Well, if you know me, I believe in testing everything regardless of how "sound" the science behind it because in practice, the theory may not hold up (and often does not).

So I decided that I wanted to put this particular part to the test. Admittedly, I wish I had just built one out of cardboard or something to test it cheaply first, but instead I purchased the very nicely cut aluminum version (I actually bought two different ones before I tested -doh-, one bare aluminum, one anodized).

The part looked great and while I couldn't feel anything on the first drive, I knew that any difference it made would be minimal so I shrugged it off at first.

Testing the part though is very straight forward and so once I stopped admiring the eye candy of it, I got straight to work.

To test the effectiveness of the part, I grabbed my favorite tool in the world: the differential pressure meter. I then plumbed a line into the factory air box for one test and for secondary testing I placed the tube from the differential pressure meter perpendicular to the air flow at the mouth of the air duct. Both should tell me how much positive or negative pressure is being generated at different engine speeds and vehicle speeds.

I drove the car around on the highway and did several low speed WOT runs to get several different data points on the car before and after the installation of the vented panel.

I did several WOT pulls from a slight roll to measure peak restriction. However, I was more interested in the highway pulls from 60-85mph+ and so I spent most of my time testing the vented radiator panel on the highway.

Unfortunately, the results were not as expected at all. As a mater of fact, the vented radiator panel actually caused additional restriction at lower speeds and at higher speeds. At far beyond legal speeds there may develop a benefit, but it's safe to say for the operating parameters of this car that there is no gain and actually a loss.

Of course, at first glance the part makes perfect sense. The air builds up on the surface of the radiator at higher rates of speed and may have difficulty flowing through the tight radiator fins so it seeks the path of least resistance. In theory, that's the vent in the panel. However, in practice, on this particular vehicle there are plenty of other places for the air flow to go (to the right/left side of the radiator, under the radiator). The biggest place of course is under it.

The part, marketing, and instructions said nothing about sealing the radiator completely to the grille and doing so is very impractical anyway. Additionally, I do not think it would solve the actual issue with the design.

The problem with the design is that the factory snorkel breathes through the small crack in the hood and through the grille directly below it. When you put this plate in place, it blocks the snorkel's access to its largest source of air (the grille area below it).

Thing is, had I not tested it, I would have never seen this issue and I would have gone along my happy way with less power than before just because I believed the claims of the part. It could also be that the part does work, but only at 120mph and beyond for example. If that's the case, that's great but the car never operates there so any benefit there is meaningless and the losses at the actual operating speeds are unacceptable.

This by the way isn't the first part that I've encountered that made things worse rather than better. It's not necessarily that the part maker made a junk part, though that does happen too. Sometimes it's just that particular part is not suited for your particular application or desired operating conditions.

That said, this same idea in another vehicle might actually work. In fact, there are some OEM vehicles that use a similar design to help feed the intake system. The difference in the OEM designs is that an engineer was able to model the air flow through the radiator at various speeds and figure out exactly where the air was going in order to channel it into the intake duct correctly. Few if any aftermarket part makers have access to that kind of information and equipment.

The point I'm trying to make is that you have to test because either the part maker never tested it in the first place, tested it on a car that isn't identical to yours, or it was designed with different operating parameters in mind.

In customized cars, the further you deviate from the original design, the more important testing becomes. Two quick examples and then I'm out of here.

First is the innocent act of fitting a new front bumper from a body kit package. This seems like it would have no effect on vehicle performance, but it may. Air flow might be altered to the brakes, intake system, radiator, and aerodynamics may change. You may get better or worse gas mileage as the result of additional or lessened drag/frontal area and you may get more or less front aerodynamic lift after fitting this bumper. An intake snorkel that worked great before, may not work well at all now and a new positioning might now be optimal. Another reason why other people's testing is not all that helpful to you, especially if you've modified a lot.

Second is fitting a part that has the wrong design parameters. Enthusiasts fit racing parts on street cars all the time and it's just plain dumb. As an extreme example putting "racing" brake pads on a car that is spending most of its time on the street is just foolish. The racing brake pads are of course designed for temperatures only seen during races, they're almost all completely useless at street driving temperatures. A much less extreme example is putting performance parts on your car designed for circuit driving when you're out drag racing. Sometimes the intended application isn't always obvious and thus the reason you need to learn as much as you can about how and why parts work, not just buy whatever you hear about on the forums or in the magazines.

Good luck with your modifications, and please - TEST, TEST, TEST.